Barbara Porter has returned from India where she has been running two one-week seminars for English teachers on behalf of HELP. As can be seen below, the participants (school teachers from local private and state schools) were overwhelmingly positive about the seminars. However, there are some issues that need sorting out before we do this again, including finding an optimum time of the year to run the seminars (when the schools can spare the teachers), and making sure that the seminars are advertised effectively. We were hoping to have 20 perticipants at both the Kalimpong and the Gangtok seminars, but in fact only 15 attended regularly in Gangtok, and 17 in Kalimpong. Attendance certificates were issued to all of these.

I think we can be pleased with what is our first venture into teacher training, and I should like to thank those organisations who specifically gave us grants to enable this to happen: the Community of the Presentation and Himalayan Kingdoms, both of which gave us £500. Thanks also to all those volunteers whose fees have gone into our general ‘donations’ fund, and to individual donors who have also given us money to use as we think fit.

Here are extracts from Barbara’s report: 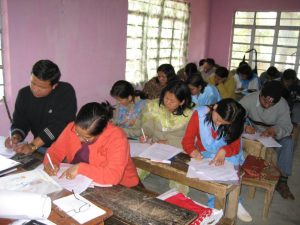 Summary of first section of Questionnaires

I was very pleased with the response to the course which I think it is fair to say was overwhelmingly positive. In particular I would like to single out the following comments:

There were some negative comments. The 3 main negative points that arose were:

I would like to make the following comments about these points:

This is a common complaint in both General English and Teacher Development courses here in Edinburgh as well. Most foreign students’ language learning has been grammar based and they associate this with ‘proper learning’. However one of the aims of our courses, and this was true of the language learning element of mine, is to redress this balance. It was also something that I was very much talking about in my methodology workshops. It was interesting that when we did a survey of how much time they spent on the 4 skills, a typical result was:

Previous to this we had had a discussion about the different skills, and had agreed that the most important skills were listening and speaking for communication purposes, and that of these speaking the most difficult and therefore needed the most practice. I therefore had a bias towards activities that increased student speaking time, including strategies such as pair work and group work.

The teachers attending mostly had a good level of English. During the course, there were many occasions when I briefly revisited a grammar point. They were all very familiar with the rules. However the problems creep in when you are actually using the language in a freer situation. This therefore was what I was focussing on and to this end I included a lot of correction of grammar in context, though often quite subtly.

I would not include ‘grammar lessons’ as such in a future course. However I do think in response to these comments, and my observations, that I would extend the ‘Practising and Presenting Structures’ section and include more grammar based games and activities that the teachers could use in their own classes by way of extension activities.

This was identified by a number of teachers, especially in Gangtok, as a problem area in their own teaching. This was especially true when correcting written work when the main 2 problems are:

· It is very time consuming.

I had planned to devote a session to error correction for both spoken and written work. With regard to correcting speaking, I feel that this was very successful. In the course of the week I was able to demonstrate a number of strategies that enabled them to correct students’ speaking in a more encouraging, supportive and less intrusive way. Such methods are less teacher-dominated and operate in a way that encourages students to think about the error and its correction. The student is therefore more likely to remember the correct form.

I had also included a number of writing activities that had introduced a variety of methods of correction, as alternatives to the usual method of the teacher having to correct every single mistake. These strategies included such things as narrowing the focus to the particular grammar point or vocabulary being taught in a lesson when correcting. However this is where the sticking point came. A few teachers responded positively to this (e g the Tibetan teachers) but most were very uneasy and resistant. I did not spot this in Kalimpong until afterwards, when I had a long discussion about it with Shrawan. In Gangtok I reduced this section and asked for comments in a discussion following the class. The majority felt that pressure from parents and school authorities would make it impossible to correct in such a way. They felt that they would not be able to defend their position with educational arguments. However in the course of the post-course debrief that Ms Targain held with the PNG teachers, one of them identified the new ideas about error correction as one of the first things she would incorporate into her teaching. Ms Targain is of course a highly supportive head teacher with regard to new ideas etc.

Therefore I think I would reduce the amount of time discussing correction of written work but not exclude it. I would also include discussion of the issues as part of the course.

Timings were an issue. In Kalimpong, on day one, before we had even started they expressed horror at the length of the day. ….They said that due to outside commitments, tiredness etc they could not stay until 5pm. In my original plan I had thought to finish earlier but as I was preparing I felt I needed the extra time, hence the 5pm finish. They asked me to finish at 3.30pm but still include everything I had prepared. I pointed out this was impossible! We compromised by shortening breaks to 15 minutes and lunch to 30 – 40 minutes, in order to claw back some of the time. However it did feel rushed and I had to exclude some of the extra practice activities. Such short breaks meant that I was short on ‘gathering my breath and thoughts’ time, and time to do the small fiddly bits of preparation that lunchtimes are so useful for.

The same thing happened in Gangtok but this time Ms Targain …. told everybody that I would start at 9am and finish at 4.30pm and that any one that had difficulties would just have to make the necessary arrangements. She added that if we saw anyone leaving early their principal would be informed! I had felt a bit diffident about being so firm myself but would not now hesitate to be firm about it in the future!

At their request, when visiting St Paul’s, (the school where I had taught in 2005), I did a smaller version of the course spread over 4 afternoons. There were 9 participants:

Daniel & his wife Korona, Samuel and his wife Kamala; Ongmit Lepcha (who I knew from before) and 4 new teachers: Prasan Subba, Nirmala Pradhan, Suk Raj Rai & Sudip Sharma all new to teaching and none of whom have received any kind of training. They were all very keen and committed. Daniel closed school a little earlier than usual at 12.45pm and after a very enjoyable ‘bring & share’ lunch we worked for around 3- 4 hours every afternoon. I was impressed by, and grateful for, the high level of enthusiasm, concentration and participation.

The elements I included were:

The course culminated in an open and interesting discussion for an hour and a half, with the whole teaching team discussing what they had learnt and the particular problems and obstacles to effective learning in their own situation. Some of the same issues came up as in the previous two courses, but there were other interesting points made that I would like to raise in such discussions on any future course.