An article by Anjana Pasricha for the Voice of America:- 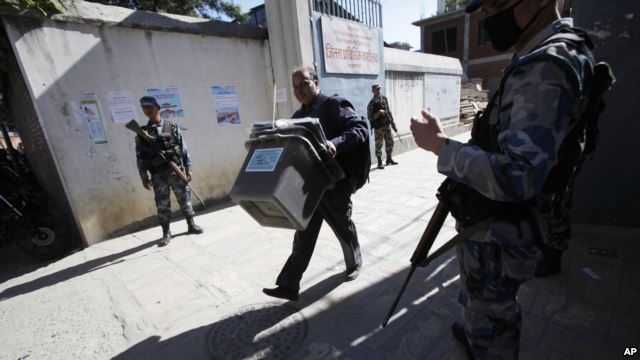 Nepal holds elections Tuesday, hoping to put an end to a five-year political deadlock that has brought the Himalayan country to a standstill. A disillusioned people hopes the polls will put the impoverished nation on a path to stability and development, but there are fears the political drift will persist.

Twenty-eight-year-old Sunil Bhattarai has been working as a domestic in India because he could not find a job in Nepal. He had hoped to return to his country after 2008, when political parties promised a new beginning following the overthrow of the monarchy and the end of a civil war. However, in the last five years, the bickering parties were not able to put together a new democratic constitution for the country or move ahead with a development agenda. Bhattarai is deeply disappointed. He said all political parties have dashed his hopes. He said poor people like him have seen no jobs and no improvement in their lives.

Tuesday’s vote offers a second chance to end the country’s debilitating political vacuum by forming a stable body to frame a constitution. Nepal is presently under a caretaker government. A director with the Center for South Asia Studies in Kathmandu, Nishchal Pandey, called it a crucial vote.

“We have already had five prime ministers in six years. People are frustrated with 14 hours of power outage and poor law and order. It is imperative that our constitution is drafted and delivered on time. Political stability is the most important factor for this country. Our economy is in shambles,” said Pandey.

But Nepal’s fractured electorate, which resulted in a hung assembly in 2008, poses an even bigger challenge this time. That has raised fears that stability may once again elude the country.

There are nearly 100 parties competing for the 240 directly contested seats in the assembly.  Many of these are small, new parties that have sprung up in the last five years to represent a range of ethnic groups. Two mainstream parties, including the Maoists, who emerged as the largest group in 2008, have split.

The Maoists said they hoped to win these elections with a convincing margin. But that is unlikely — their appeal as the party that represents the poor has waned amid accusations that they have succumbed to the trappings of power.
Political columnists like Yuvraj Ghimire in Kathmandu worred that the situation may be even worse this time.
“During the tenure of first constituent assembly, they were busy scrambling for power than preparing the constitution last time. They have not given any proof that they are going to behave differently from last time. The bigger problem could be the house could be much more fragmented than last time,” said Ghimire.

There are also concerns about how many of the roughly 12 million registered voters will turn out to vote on Tuesday despite tight security. The elections are being held under the shadow of strikes, violence, and a poll boycott by a clutch of opposition parties led by a breakaway Maoist group. In recent days vehicles have been torched and businesses shut by opposition activists. That has raised fears that voters may be intimidated.

“I see around my house virtually empty streets. There are no vehicles, there is absolutely nobody because of this strike call. But on Tuesday we would hope people will go to polling booths despite all this bomb threats and despite pressure not to go and vote,” Nishchal Pandey described the scene.

Some young Nepalese are hoping to change the system.  Fed up with the country’s political culture, 36-year-old Ujwal Thapa has jumped into the electoral fray and is contesting as an independent candidate from Kathmandu. He hopes to transform the system from within, saying Nepalese people want leaders, not “talkers.”

“People are just tired of political forces that actually over promise and under deliver. I believe this time people are looking at candidates backgrounds very carefully and voting along those lines,” said Thapa.

Caught between hope and despair, Nepal is looking ahead to the vote, hoping for the best, but bracing for more political drift.