As the Wall Street Journal blog reports, more than 7000 Indian villagers are killed by animals every year: 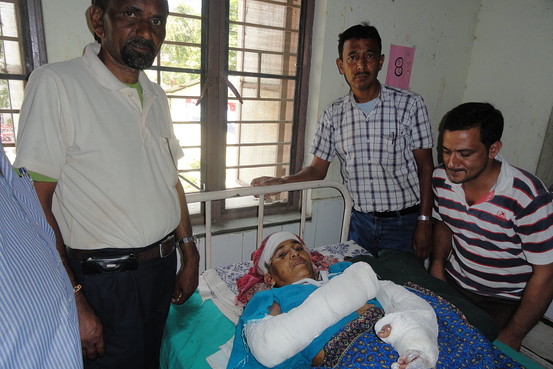 Kamla Negi, the woman who killed the leopard that attacked her, recovers in an Uttarkhand hospital on August 26.
Sohan Lal

Kamla Negi, a 56-year-old rice farmer and grandmother from a small village in northern India, fought a battle to the death with a wild leopard—and won.

She was walking home Sunday when the big cat leapt at her on a quiet path in her village in India’s hilly state of Uttarakhand.

“It pounced on me suddenly from the front,” Ms. Negi told The Wall Street Journal in a telephone interview from her bed in an Uttarkhand hospital, where she is recuperating from her ordeal. “Its claws and teeth were on my throat. I could hear it breathing.”

Luckily she was armed with the sickle she uses to tend her fields.

Ms. Negi said she tried to push the great cat away but it kept attacking so she grabbed it by the ear and started hacking at it with her sickle.

The leopard wouldn’t back down, “it sunk its teeth into my arms” repeatedly and the battle went on for close to 30 minutes, said Ms. Negi.

The leopard eventually gave up and fled. Villagers later found it lying dead on a rock near the village. 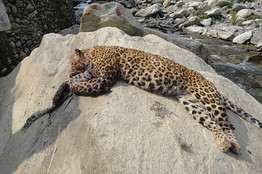 The slain leopard found near an Uttarakhand village.
Sohan Lal

“Its teeth were all broken,” said Sohan Lal, a forest officer in the district where the incident took place. “There were deep cuts on all the four legs.”

The leopard was a three-and-a-half year old female which was more than 190 centimeters from nose to tail, he said.

The exact cause of the leopard’s death will be known after a postmortem is conducted by veterinarians, he said.

Ms. Negi was still in the hospital Wednesday for treatment of broken bones and bites.

Indians are often on the losing side of encounters with dangerous animals. More than 7,000 people are killed annually by animals in the South Asian nation, most of them by poisonous snakes.

Leopards have increasingly strayed into human settlements in Uttarakhand and across the country.

A pregnant woman, a 4-year-old child and an elderly man were all killed in separate leopard attacks in Uttarkhand over the past month.