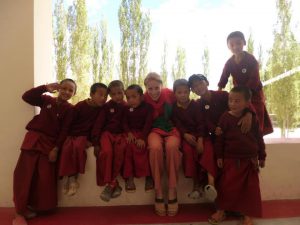 Thank you Jim, for having given me the most beautiful and unique opportunity in the world. I feel so priveliged to have spent some time with the young monks in Spituk monastery, Ladakh. The experience was so incredible, so fascinating, quite literally life changing. I savoured every minute and took this world so different to what I know and am accustomed to in with all my senses and wished it would never be over.

The set up was such a happy and caring one. The older monks adored the children and vice versa. Their wise teachers imparted all of their knowledge so freely, expecting nothing in return (ie. no salary) to children who usually came from very poor families and would not otherwise the chance of having an education. I spent many a conversation with these wonderful, wise teachers, learning how to use a mala, a kind of rosary, discussing meditation and learning about the very special child who I was so priveliged to have taught:  Rimbochele, the reincarnation of Bakula Rimpoche. The children were so interested and enthusiastic in our lessons, they liked my lively, creative teaching methods, and I attempted to give them an introduction to using the internet. In the short time we spent together we had such a positive time together.

The family that I stayed with were so kind, I was treated as an honoured guest yet at the same time as a part of the family. The grandmother endeavoured to teach me a bit of Ladakhi although it was very difficult and I was a very poor pupil! We communicated for the most part through sign language! I spent many happy evenings attempting to make typical ‘momos’ very badly to the amusement of my host parents and sister. My host sister was also a teacher and we had several interesting conversations about the difference between teaching methods and styles in our respective countries.

I attempted to make the most of every minute in Spituk village and Ladakh in general. I went to the older monks pujas first thing in the morning. Voices called out to the heavens in different tones, different pitches, bells clanging, drums booming, focused monks praying earnestly swinging backwards and forwards to the rhythms of the chants. It was such an honour to be a part of this. After classes I would go to the children’s puja, where the children would take control, the oldest children sitting at the front facing the younger ones who would eagerly shout out the words when they knew them (the chants are very difficult and this is one of the many things they learn in their lessons). Some of the youngest children would fall asleep during the ceremony, totally exhausted and I had to resist my motherly urge to scoop them up and put them into bed. I had to remember that I was an honoured guest here and that it was not up to me to make these decisions.

I would go on trips at weekends, to beautiful lakes that relaxed the mind but were unfortunately too cold to bathe in, stunning monasteries brimming in culture and history, every nook and cranny full of stories. I had so many adventures. This is the marvel of doing a trip like this, everything is so different to everything that we know. At times one can lose ones patience when things don’t go the way that one is used to. If one tries to look again at these situations from a more positive angle, to be having these experiences, so different to what we know and live daily is an enormous privelige, then its okay.

I went on a very challenging and off the beaten track hike for 10 days, in stunning landscapes. Here I contracted a parasite and was very ill for the majority of the hike which was at very high altitudes, yet something inside me helped me to soak up the experience and savour every minute. We crossed 5 peaks in 4 days at one point, the beauty of the lanscapes was absolutely phenomenal. The people we met in these isolated villages were so unbelievably kind. We stayed with our guides family one night, here we were given matresses in the only room in the house, the parents and children slept outside, they refused for it to be any other way. And so were the people every where around us. What a lesson in humility.

The most incredible part of the experience was the visit of Dalai Lama to Ladakh. Piled into a minibus with monks both young and old we would head off very early in the morning to get good places. For 3 days we had the honour of listening to the Dalai Lama’s talks. Although they was translated into English, most of what he said surpassed my weak knowledge of buddhism, but it didn’t matter. Being in the presence of such an incredible person, was very special indeed and I was inspired to do my own research into the fascinating religion of buddhism.

When I left the school, I was presented with a beautiful scroll with words from H.H The 14th Dalai Lama “The true meaning of Life: We are visitors on this planet. We are here for ninety or one hundred years at the very most. During that period, we must try to do something good, something useful with our lives. If you contribute to other people’s happiness, you will find the true goal, the true meaning of life.”